When friends become brothers: From the blood trio to the four-member supergroup

You have made your way up the long and steep way. And without compromise. Sons of Sounds: Four brothers, a progressive heavy rock ensemble, and an unwavering belief that the path of a rock band is theirs.

The Sons of Sounds in their original constellation have always consisted of Roman, Wayne, and H., three brothers who discovered the magic of music for themselves during their first nativity lessons. Her mother was the director of the Novosibirsk University of Music and her father was a professional musician. It goes without saying that this did not leave the boys unaffected.

As a four-piece heavy rock ensemble, Marc Maurer, producer, songwriter and multi-instrumentalist, and an old companion of the Sons of Sounds, the band has been completing the band since 2021, the four guys bundle energy on stage that – shaped by unity, Joy of playing and lust for life – unleashed in a loud, ceremonial rock’n’roll experience. With their sometimes perfidiously structured and avant-garde art-rock hooks, which they embed solo after solo in their classic, sometimes maidenesque rock music structures, they earn fan after fan.

The Sons of Sounds know how to capture the audience, the guys transfer the energy they draw from the music to their audience and are celebrated for it – for spending, for the show and for the songs – AND they do it, exactly that Bring the package on CD too. That only works if a band really loves what they do. Just like a band can only make the long way up if they have the right faith and know how to turn friends into brothers.

Be the first to review “SONS OF SOUNDS – Soundphonia” Cancel reply 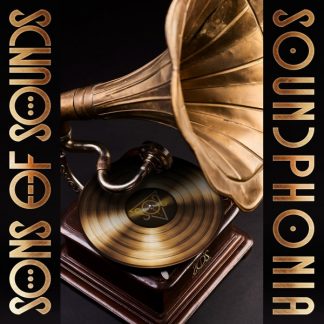