“Red Alert”, … this is the musical direction of the new album „Unleashed Bastards” by the cult thrash band NECRONOMICON, according to frontman Freddy. He added, “Everything is there; from punk to old school, from speed to flawless Thrash Metal. A full menu.”
And yes, NECRONOMICON are still there; maybe better and fresher than ever.
In 1986, the legendary debut album “Necronomicon” was released and really took off. It was followed by “Apocalyptic Nightmare” and the most popular album to date “Escalation”, which earned the punk thrashers the name “Thrash Cult”.
Then the next 3 albums “Screams”, the muchlauded 5th album ” Construction Of Evil”, which hit #6 in Spain, and “Revenge Of The Beast” followed.
Now, after the highly praised “Invictus” album and “Pathfinder … Between Heaven and Hell” (voted as one of the best metal albums 2015 in South America), “Unleashed Bastards” is in the starting blocks and we expect nothing than “Red Alert”!

Be the first to review “Necronomicon – Unleashed Bastards” Cancel reply 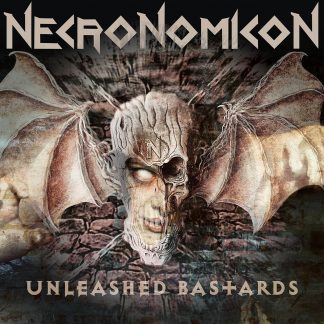