‘The band from Nässjö had its start back in 2011 when later that year they also proceeded to record their debut EP “A Taste of
Insanity”. They performed live at a couple of gigs with the EP until early 2013, where the band came to a halt due to some members leaving.

Fast forward to 2017, two of the original members Ricky Magnusson and Johan Schill felt it was time to reboot the band to find an outlet for their Death Metal ideas – based on influences from bands like Arch Enemy, Lamb of God, and Kreator to name a few. As early as spring 2017, they found their new addition to bass guitar; Mattias Gunnarsson. Ricky and Mattias were at this point already well acquainted with each other since they had been playing together in another band. During this period, they had developed good chemistry in their playing and writing. For this reason, Mattias became a most welcome addition to Silent Verdict. While the band continued working on the musical parts to the upcoming EP “Azrael”, they now needed a vocalist to fill in the ranks. After checking out a handful of applicants for the spot as a vocalist, the band eventually found Mattias Kulas, who fit in perfectly with the kind of vocalist the band had in mind. Mattias Kulas has a background as a vocalist in the Swedish metal band Eroded. With the new constellation now being complete and the new songs being thoroughly polished and pre-produced, the band decided it was time to hit the studio. They proceeded to book an appointment with HoboRec in Lund, Sweden, to record the EP “Azrael”. At the end of September 2017 and recorded it which was released in November that same year. During the summer of 2018, the band was contacted by the record label Wormholedeath and was presented with a record deal, which they later signed in March 2019. They proceeded to record their first full-length album ”Condemned” with Jonathan Mazzeo (The Grid Europe) as a producer in Pistoia, Italy. The album is scheduled to release in spring 2021.

Be the first to review “Silent Verdict – Condemned” Cancel reply 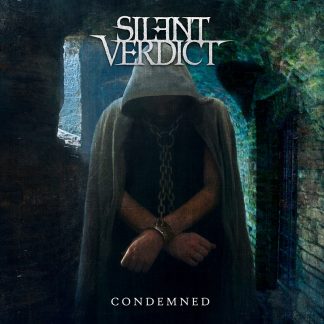