Empire of Disease – With all my Hate

‘Empire of Disease is a metal band formed in Bilbao (Basque Country) in 2015 by Sergio (Guitarist) and Iban (Drums), under the name Nightmare Within. After several changes of musicians, it was not until 2018 that the band achieved a stable formation. They began to give their first concerts in January 2019 and to produce their first work called “Silence is Violence”, which includes five songs. This work was released at the end of June of that year and was published and produced by the band itself. This EP was followed by the Demential Tour, where the band toured the north of the Iberian Peninsula and
France. This tour was also supposed to pass through Portugal and more Spanish cities, but due to the health alert in the world, the remaining scheduled dates were canceled. In late 2020 and early 2021, the band recorded what will be their second new album and first LP at Chromaticity Studios in Bilbao, which has been mixed and mastered by producer, guitarist, and composer Pedro J. Monge. In March 2021 the band sign a record contract with the Wormholedeath label (Italy, Japan, USA, Norway), they will be in charge of launching this new album called “With all my Hate” in June of the same year. 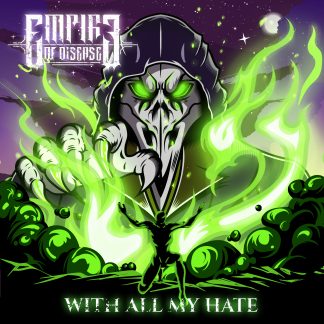