‘Formed in the small town of Kemijärvi in Finnish Lapland in 1989 by Aslak Purojärvi (drums), Mika Rytilahti (bass), Janne Särkelä (guitar) and Ari Väntänen (guitar), Arched Fire started from scratch. ”We were 14, 15 years old and had no idea what we were doing, but we did it all in the right order: 1) formed a band 2) bought the instruments 3) learned to play. And we always wrote our own songs.” Having started as a heavy rock band, they soon steered towards harder and darker metal, inspired by American and Finnish speed/thrash bands. ”If our generation had a punk revolution, that was it. Speed/thrash was a real game-changer.” Meanwhile, the global metal scene started to take shape – not that the guys knew much about it. ”There was no metal scene whatsoever in the middle of nowhere. We played a handful of gigs with local pop and rock bands that sounded nothing like us. A radio DJ called us ‘heavy speed’ because he didn’t know what our genre was called, which we thought was hilarious. But it was all great; we even got to  play live on the air twice and didn’t even think it was a big deal or anything!” Along with some live and rehearsal recordings, Arched Fire made a four-track demo. When it was (favorably) reviewed in the Finnish rock press in late 1990, the band had already split up. ”It was our first real band, and we were just teenagers. Things changed fast and life went on, and all we really needed was someone to buy us some beers. But although we went our separate ways, we never forgot Arched Fire.” As life happened, they lost touch with each other, but not with music. They all kept on playing in different bands, from power-pop to black metal, from prog fusion to folk music. Decades flew by until the time felt right to get back together. ”We listened to our old recordings and began wondering what we would have sounded like, had we known what we were doing. We decided to find out, just for the

fun of it.” That required some serious work. They kept their old, simple, energetic riffs, but completely re-arranged the song structures and wrote some new parts where needed.    “We realized the vocal lines had to be totally re-written. Back in the turn of the 90s, we talked about finding a singer and a frontman. We never did, because there simply weren’t any in our tiny hometown. But now, we all lived in different cities and knew a lot of musicians.” Soon, Kristian Herkman–an old bandmate of Rytilahti’s–joined the band.

“As soon as he sent us his first demo version of ‘Escape’, he just felt right. He sounds the part and writes fantastic vocal lines. He really took the band on a whole new level.” Adding a couple of new songs among the old material, the re-born band started to work on an album. “We wanted to keep the songs simple like they used to be, but with the know-how, we have now. Production-wise, we wanted it to sound old-school, but with present-day standards. The plan was to make our teenage kicks meet our present skills as musicians, and it  was a lot of fun.” And when it came to coming up with a genre, it turned out it had been there since 1989. “We used to joke about the silly ‘heavy speed’ moniker that the radio DJ came up with ages ago, but it’s actually an apt description of what Arched Fire sounds like; heavy metal meets speed metal. So, a heavy speed band we are!” Soon after finishing the album, Arched Fire signed with WormHoleDeath Records. “Remote Control is Arched Fire’s first album. We were working on it throughout the year 2020. Most of the time was spent on writing songs. We created new music, wrote lyrics, and developed some ideas and concepts from the band’s early days. The music is straightforward and in-your-face; speed metal meets heavy metal. A lot of the songs are dealing with themes like power and control on different levels and from different angles – thus, Remote Control. It’s a fitting title also because we often had to co-operate from distance (for obvious reasons).” 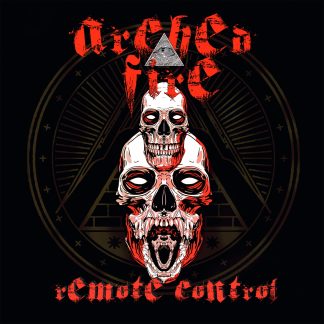